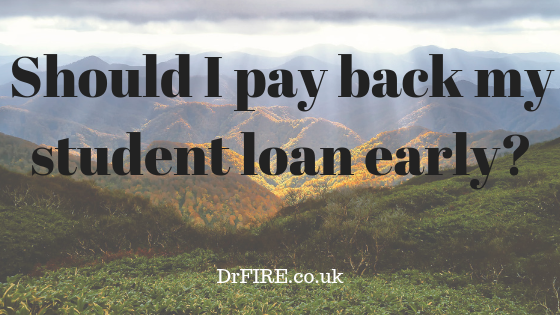 A look at whether or not it makes financial sense to pay off my own student loan early:

Over here in the UK, the question is not so simple. Students nowadays are graduating with an average of £32000 of debt, which is far more than any time previously. So, does it make sense to prioritise paying them back asap, as they do in the States? Let’s take a look…

In 1962 the Education Act was published, which essentially meant that UK residents didn’t have to pay anything to attend university, and means-tested grants were available for lower income families.

This act was then repealed in 1998 by Tony Blair and the Labour government, allowing the introduction of tuition fees. They were initially just £1000 per year, and loans were provided by the Student Loans Company (SLC). Tuition fees were increased to £3000 in 2006-07 (in England and Northern Ireland; Wales increased them a year later), and again to £9000 in 2012 by David Cameron and the Conservative-Lib Dem coalition. As a result, there are two different loans types; “Plan 1” for anyone who attended university before the introduction of the £9000 tuition fees, and “Plan 2” for anyone who attended after.

As well as tuition fee loans, the SLC also offers maintenance loans to cover the cost of living. Whilst I was at university this was approximately £3500 per year. A quick look at the government’s own website shows that maintenance loans can now be up to £11000 if you’re living away from home and studying in London! Using the student finance calculator it looks like I would be eligible for a loan of around £6000 if I were to attend university for the first time this year.

On reflection, I kind of wish I had Plan 2 loans rather than Plan 1! Even though my total loan would be higher, I wouldn’t have to pay anywhere near as much back each month due to the higher loan repayment threshold, and over the course of 30 years would probably pay back less in total than what I will as a result of being on Plan 1.

So…. Should I pay off my student loan?

Let’s take a look at the numbers and get out a calculator (or, more accurately, the excel spreadsheet):

I graduated during the era of £3000 per year tuition fees, which means that I am on the Plan 1 loan. My current outstanding loan is approximately £23500, and I’ve paid roughly £4700 so far. I currently pay £98 per month towards my loan after tax, national insurance and pension contributions. Assuming I continue to pay £98 between now and when my loan is written off in another 19 years’ time, I will pay around £22000 and, according to my rough calculations, will have about £6000 left over. However, I’m making several assumptions here that I know won’t be true. First, I’m ignoring the fact that the repayment threshold increases every year, which will extend the life of the loan but will also mean that I should pay back less each year. Second, I’m also ignoring any potential pay increases that I may or may not receive in the future. I guess I’m assuming that these will cancel each other out. Finally, this is assuming no change in the interest rate, which seems very unlikely! It wouldn’t surprise me to see interest rates rise slowly over the coming years/decades, which would increase the amount left over.

Initially, it looks as though I’m right on the cusp of it actually making sense to pay it off early. The amount that I am expecting to pay is slightly less than the remaining balance of the loan. If I happen to get a promotion in the next few years then I may end up paying more than the actual balance due to the interest accruing over the years.

However, this isn’t considering the paltry interest rate on my student loan. At the moment it’s only 1.75%. I can put the money to better use by simply putting the money into a current account with a higher interest rate, or by sticking it all in the stock market where it should return at least 5% per year (based on past trends).

Overall, this confirms what I initially suspected – there is currently no benefit to me paying off the loan in full at this moment. On the one hand, I might save a few thousand pounds in interest if my salary increases over the next few years. However, that is massively offset by the points that I made above, which makes UK loans so much better than US loans. First of all, the repayment is entirely income dependent. If I earn £30K then I pay back around £90 a month, but if I quit my job or am made redundant (or retire early), then I don’t need to repay anything. And will continue to not have to pay anything until I get a new job that pays over the repayment threshold. Secondly, the remaining balance of the loan will be written off in another 19 years! This means that I don’t even need to worry about the balance plaguing me for the rest of time. It will simply cease to exist around the time that I turn 50. And finally, the interest rate is so low that I can earn more money by simply sticking it all in the stock market / high-interest current accounts.

So. There we go. No early repayment of my student loan. I’ll keep the money invested instead!