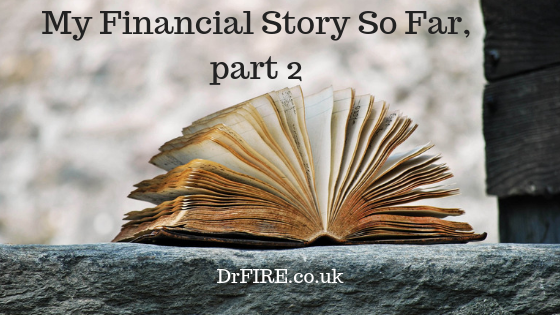 Part 2 of my life story and financial journey to date.

During the final year of my undergrad degree I decided to do a PhD. I had three main reasons. Firstly, on looking at all of the biographies and work histories of the lecturers at my university, they had all spent some time abroad. I thought the idea of working outside of the UK for a few years sounded cool, and it looked like getting a PhD would enable me to do that. Secondly, I had enjoyed the research project that I undertook during undergrad and wanted to carry on. Finally, it was actually just easier to start the PhD than it was to apply for another job, so I essentially followed the path of least resistance. I simply had to ask my undergrad supervisor if they had any funding for a PhD. They said yes, and that was pretty much it!

I made some financial mistakes in the first year of my PhD, but I was able to quickly remedy that in subsequent years. On starting the program, all of my friends had already graduated and left the city. Rather than move in with strangers, I decided to rent my own flat. Whilst it was pretty fun to live by myself for the first time ever, it was also expensive! A PhD stipend is a lot more than the maintenance loans you get during undergrad (at the time, about £13,500 vs about £3500 a year) but it still goes quickly. I was essentially breaking even each month and was unable to save anything from each pay cheque.

Luckily, during that first year I made several great new friends and was able to move in with them at the beginning of my second year. I also started getting more involved with the university, helping with lab demonstrating and giving tours to prospective undergrads. Suddenly I was inundated with money! Well, not really, but it felt like it. My rent was cut in half and bills were a fraction of what they were the year before. I didn’t increase my expenditure either, which meant that my savings were finally starting to grow. By the time I graduated, I probably had about £10,000. I mostly just kept it in a cash ISA. I don’t think the personal savings allowance existed at this point, and the idea of switching bank accounts to find the best deal had yet to occur to me.

Towards the end of my PhD, my supervisor approached me and asked, “how would you like to work in Asia?” To which my response was, “I.. Wait, what?!”

It turned out that my supervisor had a friend and colleague who was looking for new recruits. Specifically people who had been doing exactly what my PhD had consisted of for the last four years. This was one of those instances where I really was in the right place at the right time. It’s also where I realised how true the phrase “it’s not what you know, but who you know” really is.

I’ll probably write about it in more detail in a future post, but for now I’ll simply say that I fully recommend working abroad for a few years if possible. Whether it’s a placement year in Europe during your degree, teaching English in Asia, or postdoccing in America, definitely take advantage of such a fantastic opportunity. You get to meet new people, experience completely different cultures and really challenge yourself. This was also when I met my now girlfriend, so I suppose I might be biased in my opinion!

Financially, this job was a real boon. The wage itself was comparable to similar roles in the UK. However, my cost of living was much lower. I was able to save over half of my salary each year. Unfortunately, all things come to an end eventually. I was enjoying the experience and watching my bank balance grow, but after a few years abroad I was getting real tired of the near constant presence of smog and pollution. You might think it’s bad when you see it on TV, but try living through it! I decided that my personal health was more important than my savings rate, so I thanked my employer for the amazing opportunity and decided to call it quits.

This all brings me to today. I’m now back in the UK, working for a University and living with my girlfriend, who is studying for her PhD. My savings rate is currently lower than it was in my first job, and is probably more comparable to when I getting my PhD. This is fine for the time being, especially as I am essentially supporting two people on one income. I’m enjoying myself more than when I lived abroad. I’m much closer geographically to friends and family once again, and I’m able to live with my girlfriend and see her everyday. It also helps that I know that this current arrangement is only temporary; once my girlfriend finishes her PhD and starts work we’ll split the bills and groceries 50:50, which will probably give me back about £500 per month.

As I said in the my first post, I decided to start this blog to track my financial journey and to connect with others in the personal finance / financial independence community. If you’ve read through all this and you want to come along for the ride, then you can check out the rest of my posts in the Archives.